Ok, so due to some issues with blogger not working, I decided that today would be a great day to switch over to WordPress! I’ve been dragging my feet on the move because I just haven’t been able to get in here to really get this blog set up the way that I want. I still need to make some changes, but I have to say that I am loving it so far!

So in honor of a fresh start, I have decided to share my recipe for

Yes, you read that right! I decided to include three of my favorite things into one bit of yummy awesomeness! I really wasn’t sure if it would work or not. The first batch was yummy. But I decided to try it again and tweak some things that just didn’t work. So here is the new, improved, and yummy recipe.!

Preheat oven to 350 degrees. Lay out the strips of bacon on a cookie sheet. Dust with black pepper and put into over for 15 minutes. When the timer goes off, remove from oven, drain, flip, and put back in for another 10 minutes.

Here is where it gets a little tricky. The bacon needs to get very crispy without burning. You might have to drain and flip a few different times. I ended up standing there just watching it and setting the timer for 5 minutes at a time until I felt it was done. When you think it’s done, take it out and lay it out on paper towels. Don’t turn off the oven!

(You might want to taste the whiskey and bacon before putting it into the mix. After all, quality control is VERY important!)

Now, set aside several pieces of bacon for topping (and munching)

Break the bacon up into LARGE pieces. I’m not kidding here. I’ve tried it both ways and the bigger the bacon pieces, the better the cupcake! Now add it to the cake mix and stir well.

Spoon your cupcakes into the paper molds and back for about 18-20 minutes!

Let the cupcakes cool completely before you put icing on them.

Now what kind of icing? That’s the tricky part. I tried a few different things, I dusted them with powdered sugar, used chocolate butter cream, cream cheese frosting. I honestly think that the plain buttercream was the best. But feel free to frost using whatever you want!

Using the leftover bacon (assuming you didn’t eat it all while waiting for the cupcakes to cool) break into large pieces and set atop each cupcake!

Here is a photo of the cupcakes I made last weekend! 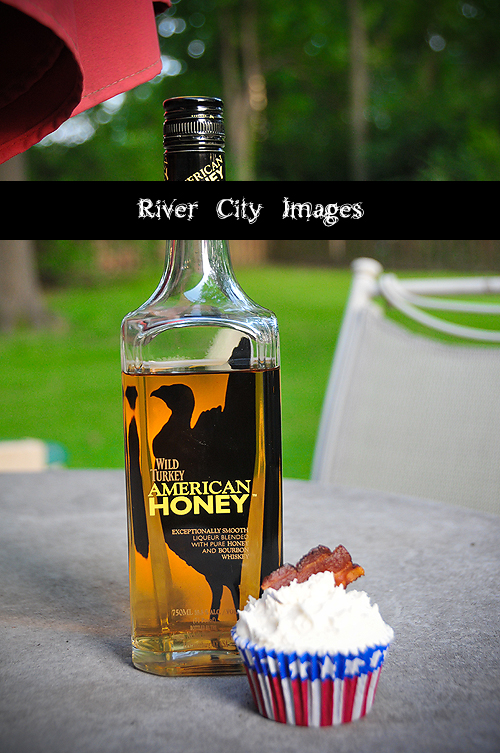